The History of Feb Club

Feb Club has a long and storied history..... or at least we think it does.

The Origins of Feb Club Emeritus

2008 marked the birth of the first ever alumni Feb Club - a full-calendar, international affair.  It all started innocently enough during a Class of 1987 lunch in New York in late October 2007, where classmates Tim Harkness and Kara Unterberg mused about bringing Feb Club back to New York.

Tim mentioned the idea in a class e-mail newsletter in early November, to which fellow '87 grad Jordan Warshaw replied: "..... I am pleased to hear you're attempting to revive the tradition.  How about this for an idea?  28 nights, 28 cities. 28 parties.  Might have to start small in year 1, but within a few years, who knows...???"   Tim's reply: "I think the idea rocks.  It would even work if we had 28 nights in only a few cities."

Jordan and Tim were joined by Kara and by Class of 1988 class secretary Julie Heller, who formed an impromptu "Feb Club for Old People" committee (The Ministry of Feb Club) to advance the idea further.

The Original Ministry of Feb Club 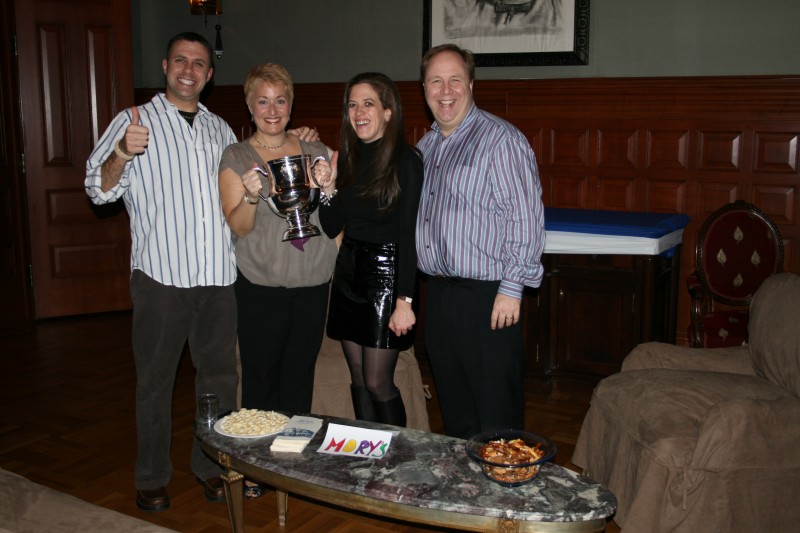 Jordan sent an e-mail to a small group of classmates who the Ministry thought might be game for hosting a little event in their towns, stating "finding 28 (29) cities with motivated alums may be a bit of a stretch, but it's an admirable goal. To those who might suggest we throw in the towel early and limit the festivities to NYC, Boston, LA, etc., we have but one response: Give up? Did we give up when the Germans bombed Pearl Harbor?"

Of course, some classmates immediately responded by chastising Jordan and reminding him that the Germans didn't bomb Pearl Harbor, but other more culturally aware classmates, recognizing that quote as having come from John Belushi's legendary pep talk in Animal House, immediately jumped on board...... and suddenly, Feb Club for Old People took on a life of its own. Within a month of that first e-mail, the calendar was full; by the time February '08 hit, parties hosted by a pioneering group of alums from classes from the '70's through '00's took place in 35 cities around the world, attended by over 3,000 alums. 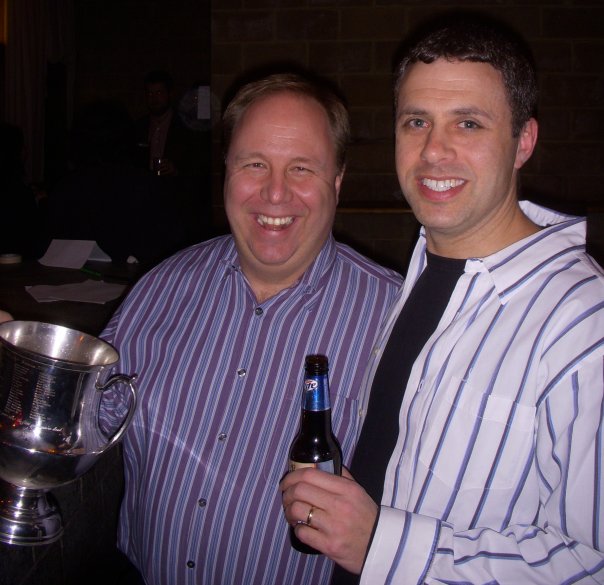 Tim and Jordan continued and expanded the tradition in 2009, as most of the Feb Club '08 hosts returned for a second year, and more alums from five decades of classes joined the legion of party hosts in cities old and new.  By the time the calendar was closed for February '09, Feb Club had spread to 62 cities worldwide.  Over 5,000 alums attended these 62 parties, with attendees ranging from the Class of 1941 to the Class of 2008.  In February '10, 90 cities hosted Feb Clubs.

By 2011, the sheer size of the effort occasioned the knighting of two new Ministers, Marty Fleischmann BK '88, impressario of the Atlanta extravaganzas and one of the earliest original party hosts, and Steven Blumenfeld, the first-ever undergrad Minister of Feb Club for Old People (is that even possible?).  In any event, so much for starting small!

Legend has it that Feb Club started in the ‘70s, that it ended in the late ‘90s and that it was resurrected in 2006.  Each year, a student, group of students or organization would be handed down the solemn task of organizing 28 (29) parties around the Yale campus, and spreading the word among the student population.  In the early days, there was no e-mail, no web pages, no Facebook.... so word of the parties, their locations, hosts and themes were truly spread by word of mouth.  Feb Club parties ranged from simple get-togethers in a dorm room to elaborate choreographed affairs involving multiple hosts and locations.  In 1987, for example, parties ranged from 18 holes at Timothy Dwight College (i.e. 18 rooms, 18 themes), to a highfalutin affair at the Yale Yacht Club, to Valentine's Day red “special” jello at Zeta Psi, to a Manhattan road trip, to the annual upside-down kamakaze tradition at Morse College.

Many hazily recollected tales as to the actual creation of Feb Club have drifted in from members of the Classes of the late 70's and early 80's.  Check out the Feb Club Guest Book for a variety of stories as to how Feb Club really started...

News Flash: The True Origin of Feb Club Discovered - Check This Out From the Yale Daily News, 1975:

(that is, if we can ever figure out how to link a pdf file to this free website!)

The New York Times did a story on Feb Club in 1989.  From the 1980's to recent years, the Yale Daily News and the Yale Herald have written stories about Feb Club's traditions and history.  A recent YDN story is from 2006.   In 2007, the Herald covered our venerated tradition's resurgence as well.

Did you help create Feb Club?  Organize it any year? Host any Feb Clubs? Have any Hall of Fame-worthy exploits?

We're trying to track down and list those who created Feb Club, organized Feb Clubs, hosted parties back in the days of yore, or who were otherwise noteworty for reasons good, bad or ugly.  Please share your recollections - accurate, hazy or otherwise -in our Guest Book.  We will add your name to the Official History, Hall of Fame, Hall of Shame, or wherever appropriate as the facts trickle in...

Oops! This site has expired.

If you are the site owner, please renew your premium subscription or contact support.